We are a dedicated non-profit volunteer group, and since 2004, a Stand Alone Committee of the Lindsay & District Horticultural Society, under the umbrella of the Ontario Horticultural Association.

As such, we are Stewards of the Lilac Gardens of Lindsay, dedicated to continuing the Millennium Project for the Citizens of Lindsay.

What began in 1994 as a vision by Len Shea, a Lindsay Citizen of the Year, to “Plant a Legacy” of lilacs for Lindsay, the Millennium project was conceived by founding the ‘Lilacs for Lindsay’ group of like-minded Citizens of the Year proposing to make Lindsay “abundant with lilacs” by having “a lilac in every garden”, on public and private properties, and developing a Horticultural garden featuring lilacs.

With endorsement from the Master Gardeners, and the Horticultural Society, they presented their proposal to Town Council.

In 1996 the Town Parks Department granted permission to plant lilacs in a portion of Logie Street Park.

In 1998, a ‘seed money’ grant, from the Lindsay & District Horticultural Society, enabled the first 209 lilacs of eleven different species to be planted.

That same year,The Master Gardeners group, with a grant from the Canadian Wildlife Federation, created, and maintain, a Perennial Butterfly Garden, creating a special feature which attracts many birds and butterfly species. Generous contributions provided Arbours, where visitors can stop and admire the nature around them.

By year 2000, the Millennium Project was well under way, with ‘Plant a Lilac, Plant a Memory’, lilacs were being planted in gardens throughout town and fronting various commercial premises such as Home Building Centre, Polito Ford, and Zellers (now Target) ( where up to year 2012 these shrubs were maintained by a young 90 something Mr.Len Shea himself). The first Caressant Care nursing home and St Mary’s Cemetery adorned their locations with lilacs, some purchased from the Lilac Gardens Committee on Open House days.

When a second location was approved in Mayor Jim Flynn Park, and the volunteer group ‘Lilacs for Lindsay’ planted about 85 lilacs there, we became the ‘Lilac Gardens of Lindsay’.

In 2002, when judges from ‘Communities in Bloom’ toured the gardens, they highly commended the Lilac Gardens Committee volunteers for their extensive planting of more than 130 lilac varieties.

Visitors to the main garden began making  donations to dedicate a planted lilac to a loved one. Donations then began being made with the first plantings in the newly created ‘Memorial Walk’ which later transformed into a unique ‘Memory Walk’ allowing donations to dedicate a lilac along the walk for any special, memorable event. A certificate is presented and a marker may be placed at the chosen shrub.

In 2006, Logie Street Park was now a dedicated park with lilac shrubs on view.

In 2007, the Mayor of Lindsay proclaimed the lilac as the ‘Official Shrub of the City of Kawartha Lakes’ in recognition of  the achievements of the Lilac Gardens of Lindsay Volunteer Committee.

As a member of the International Lilac Society, we began labeling to its standards. This method of identification enables recognition of species lilacs by visitors from the world over.

A dedicated lilac shrub was planted as part of a ceremony to honour Harold James, an original founder.

In 2009, a segment of the Trans-CanadaTrail provides accessibility to the lilacs as it passes between the newly created perennial Welcome Gardens.

In 2010, a Heroes garden was developed to honour the Military, the Police, Fire Service, and EMS, and was dedicated with a plaque in a Salute to Heroes ceremony.

Presentation of lilac to Bill Huskinson (2nd from right) one of original Lilacs for Lindsay committee. Each of the original members in turn is honoured at our open houses.

At 2012 Festival, Len was recognized by three levels of Government, each awarding an award of distinction.

By 2013, many dedicated volunteers have helped develop this horticultural showplace. Showcasing close to 600 lilacs, 150 varieties, and 15 species, the Lilac Gardens of Lindsay has become a significant collection attracting many visitors each year.

The bad spring weather and road conditions have delayed our work in the Gardens. Road work is affecting our access. 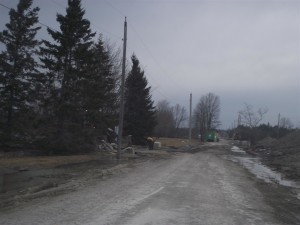 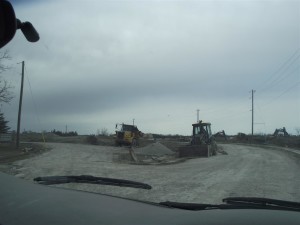 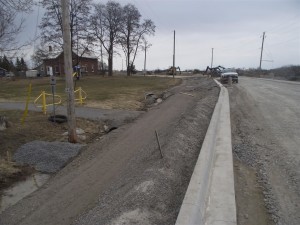 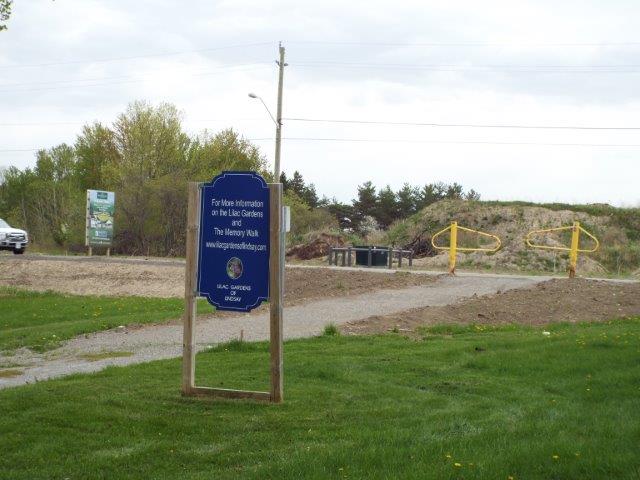 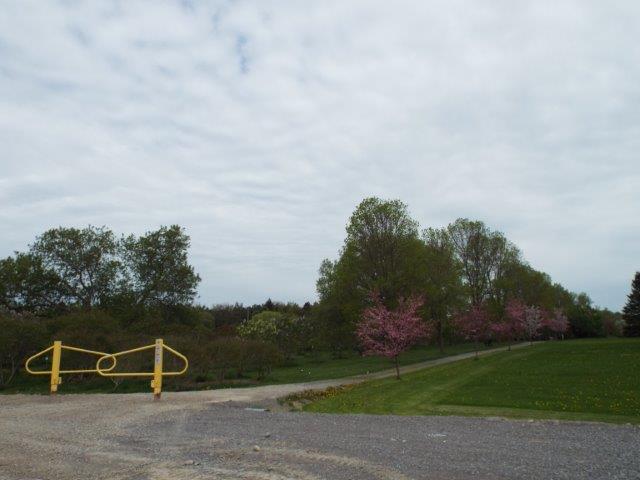